The Game Boy is an 8-bit handheld game console which was developed and manufactured by Nintendo and first released on 1989-4-21, in North America on 1989-7-31, and in Europe on 1990-9-28. It is the first handheld console in the Game Boy line and was created and published by Satoru Okada and Nintendo Research & Development 1. This same team, led by Gunpei Yokoi at the time, is credited with designing the Game & Watch series as well as several popular games for the Nintendo Entertainment System. Redesigned versions were released in 1996 and 1998 in the form of Game Boy Pocket and Game Boy Light (Japan only), respectively.

The Game Boy is Nintendo's first handheld game console and it combined features from both the Nintendo Entertainment System and Game & Watch.<ref name="allgame" /> It was sold either as a standalone unit or bundled with the puzzle game Tetris.

During its early lifetime, the Game Boy mainly competed with Sega's Game Gear, Atari's Lynx, and NEC's TurboExpress. The Game Boy outsold its rivals and became a significant success. The Game Boy and its successor, the Game Boy Color, have sold over 118 million units worldwide. Upon the Game Boy's release in the United States, its entire shipment of one million units was sold within a few weeks.<ref>Kent 2001, p. 416. "According to an article in Time magazine, the one million Game Boys sent to the United States in 1989 met only half the demand for the product. That allotment sold out in a matter of weeks and its black and white (except for Konami/Factor 5 games and SeaQuest DSV), was shown in color like the Game Gear version."</ref> Production of the Game Boy and Game Boy Color were discontinued in the early 2000s, being replaced by the subsequent Game Boy Advance, released in 2001. 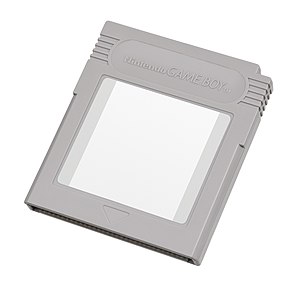 The standard gray cartridge for the original Game Boy games, although other colors and shapes exist.

The Game Boy has four operation buttons labeled "A", "B", "SELECT", and "START", as well as a directional pad. There is a volume control dial on the right side of the device and a similar dial on the left side to adjust the contrast. At the top of the Game Boy, a sliding on-off switch and the slot for the Game Boy cartridges are located. The on-off switch includes a physical lockout to prevent users from either inserting or removing a cartridge while the unit is switched on. Nintendo recommends users leave a cartridge in the slot to prevent dust and dirt from entering the system.

The Game Boy also contains optional input and/or output connectors. On the left side of the system is an external 3.5mm × 1.35mm DC power supply jack that allows users to use an external rechargeable battery pack or AC adapter (sold separately) instead of four AA batteries. The Game Boy requires 6 V DC of at least 150 mA. A 3.5 mm stereo headphone jack is located on the bottom side of the unit which allows users to listen to the audio with the bundled headphones or external speakers.

The right-side of the device offers a port which allows a user to connect to another Game Boy system via a link cable, provided both users are playing the same game. The port can also be used to connect a Game Boy Printer. The link cable was originally designed for players to play head-to-head two-player games such as in Tetris. However, game developer Satoshi Tajiri would later use the link cable technology as a method of communication and networking in the popular Pokémon video game series.