The Game Boy Color (GBC) is a handheld game console manufactured by Nintendo, which was released on October 21, 1998 in Japan and was released in November of the same year in international markets. It is the successor of the Game Boy.

The Game Boy Color features a color screen. It is slightly thicker and taller and features a slightly smaller screen than the Game Boy Pocket, its predecessor. As with the original Game Boy, it has a custom 8-bit processor made by Sharp that is considered a hybrid between the Intel 8080 and the Zilog Z80. The spelling of the system's name, Game Boy Color, remains consistent throughout the world with its American English spelling of color. 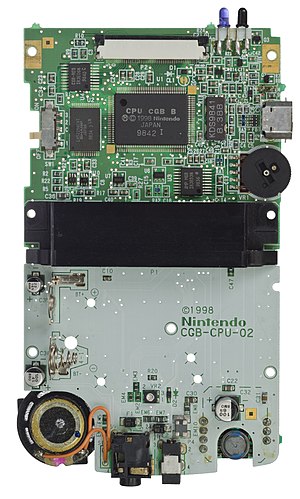 The technical specifications for the console are as follows:

Game Paks manufactured by Nintendo have the following specifications:

The Game Boy Color also featured an infrared communications port for wireless linking. The feature was only supported in a small number of games, so the infrared port was dropped from the Game Boy Advance line, to be later reintroduced with the Nintendo 3DS, though wireless linking (using Wi-Fi) would return in the Nintendo DS line. The console was capable of showing up to 56 different colors simultaneously on screen from its palette of 32,768 (8×4 color background palettes, 8x3+transparent sprite palettes), and could add basic four-, seven- or ten-color shading to games that had been developed for the original 4-shades-of-grey Game Boy. In the 7-color modes, the sprites and backgrounds were given separate color schemes, and in the 10-color modes the sprites were further split into two differently-colored groups; however, as flat black (or white) was a shared fourth color in all but one (7-color) palette, the overall effect was that of 4, 6 or 8 colors. This method of upgrading the color count resulted in graphic artifacts in certain games; for example, a sprite that was supposed to meld into the background would sometimes be colored separately, making it easily noticeable. Manipulation of palette registers during display allowed for a rarely used "high color mode", capable of displaying more than 2,000 colors on the screen simultaneously.

For dozens of popular Game Boy titles, the Game Boy Color has an enhanced palette built in featuring up to 16 colors - four colors for each of the Game Boy's four layers. If the system does not have a palette stored for a game, it defaults to a palette of green, blue, salmon, black, and white. However, when the user turns on the system, they may choose one of 12 built in color palettes by pressing certain button combinations (namely a direction key and optionally A or B) while the Game Boy logo is present on the screen.

These palettes each contain up to ten colors. In most games, the four shades displayed on the original Game Boy would translate to different subsets of this 10-color palette, such as by displaying movable sprites in one subset and backgrounds, etc. in another. The grayscale (Left + B) palette produces an appearance similar to that experienced on the original Game Boy.

Illustrated color-samples of the palettes for the different key-combinations. Any color crossed out will be present in palette RAM, but rendered as transparent.

A few games used a technical trick to increase the number of colors available on-screen. This "Hi-Color mode" is a mode used by the Italian company 7th Sense s.r.l. among others, and can display more than 2000 different colors on the screen. Some examples of games using this trick are The Fish Files, The New Addams Family Series and Alone in the Dark: The New Nightmare. 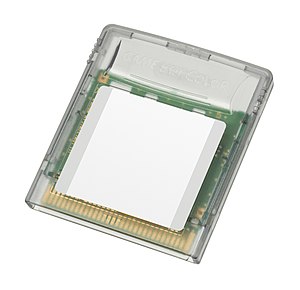 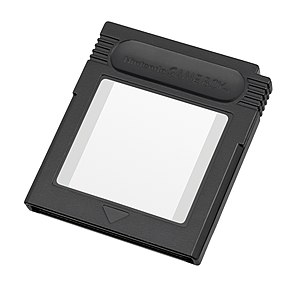 The black cartridge was for Game Boy games that took advantage of the Game Boy Color's increased palette but not the increased memory or processor speed. These games can be played on original Game Boys in grayscale.

The logo for Game Boy Color spelled out the word "COLOR" in the five original colors in which the unit was manufactured. They were named:

Another color released at the same time was "Atomic Purple", made of a transparent purple plastic that was also used on the color-respective Nintendo 64 controller.

Other colors were sold as limited editions or in specific countries.