The Nintendo 3DS, or simply the 3DS, is a handheld game console produced by Nintendo. It is capable of displaying stereoscopic 3D effects without the use of 3D glasses or additional accessories. Nintendo announced the console in March 2010 and officially unveiled it at E3 2010 on June 15, 2010. The console succeeds the Nintendo DS, featuring backward compatibility with older Nintendo DS video games. Its primary competitor is the PlayStation Vita from Sony.

The console has custom components codeveloped by the Nintendo Research & Engineering Department and other manufacturers, all combined into a unified system on chip. The main processor (CPU) is an ARM11 MPCore-based dual-core processor manufactured at 45 nm. One processor core is dedicated to games and applications, while the other core is exclusive to the operating system, enabling multitasking and background tasks. These tasks are handled seamlessly in the background during gameplay or while the system is in sleep mode. The system also contains a single-core ARM9 processor, enabling backward compatibility with Nintendo DS games. The graphics processor (GPU) is developed by Digital Media Professionals, and consists of a semi-custom PICA200 processor.

The system contains a total of 128 MB of system memory consisting of two 64 MB (512 Mb) FCRAM chips developed by Fujitsu, with a maximum bandwidth of 3.2 GB/s. However, 32 MB is reserved for the operating system and unavailable to games. Additionally, the system contains 6 MB of VRAM. The console also contains a dedicated hardware audio DSP module capable of outputting mono, stereo or pseudo-surround sound through either its two speakers or headphone jack.

The system features three camera sensors: two cameras on the outside of the device, capable of taking 3D photos and capturing 3D video; and one camera facing the user positioned above the top screen. All camera sensors have a maximum resolution of 640×480 pixels (0.3 megapixels, VGA) with one-point focus and can only achieve digital zoom. There is also a microphone in the bottom of the system.

The system includes 1 GB of internal flash memory manufactured by Toshiba, but it is mostly used by the operating system and its pre-installed applications. The system's memory can be expanded via an SD memory card slot, which supports SD and SDHC memory cards. All Nintendo 3DS systems come packaged with a 2 GB SD card while Nintendo 3DS XL systems include a 4 GB SDHC card. The system uses 2.4 GHz 802.11 b/g wireless network connectivity with enhanced WPA2 security. There is also an infrared port on the back of the console, which allows the system to connect with certain peripherals such as the Circle Pad Pro and the amiibo reader/writer.

The Nintendo 3DS input controls include the following: a round nub analog input called the Circle Pad, a D-pad, four face buttons (A, B, X, Y), bumper buttons (L, R), a Home button, Start and Select buttons, and a Power button. It also features a dedicated volume slider and a wireless switch, which turns on or off wireless communications. The touchscreen can be interacted with either the user's finger or a stylus bundled with the handheld. There is also a six-axis motion sensor, which includes a 3-axis accelerometer and a 3-axis gyroscope. Through the Circle Pad Pro accessory the system has access to a second Circle Pad and trigger buttons (ZL, ZR).

The Nintendo 3DS Game Card is a media format used to physically distribute video games for Nintendo 3DS systems. Despite looking near-identical to its predecessor, the Nintendo DS Game Card, there is a small tab jutting out on the side of the card, preventing 3DS game cards from being inserted into a Nintendo DS. These game cards can hold up to either 1 GB, 2 GB or 4 GB of game data depending on the game, which is 2, 4 and 8 times more storage, respectively, than the biggest Nintendo DS Game Card's capacity (512 MB). Some sources claim that an 8 GB version could be produced should a game ever require it.

The Circle Pad Pro is an accessory/add-on which connects to a Nintendo 3DS system through infrared adding support for a second Circle Pad, a substitute R button input (as the original one becomes difficult to reach), and an extra set of trigger buttons (ZL/ZR). The device was first released in Japan on December 10, 2011, coinciding with the release of Monster Hunter 3G in the region. It was subsequently released in Europe on January 27, 2012, in Australia on February 2, 2012, and in North America on February 7, 2012, coinciding with the release of Resident Evil: Revelations in those regions.

The C-Stick and ZL/ZR buttons on the New Nintendo 3DS are backward compatible with Circle Pad Pro-compatible titles.

The Nintendo 3DS family currently has five models available. Apart from the regular-sized Nintendo 3DS, the Nintendo 3DS XL is a larger model of the console which was released on July 28, 2012, and features 90% larger screens than the original Nintendo 3DS. The Nintendo 2DS is a complete redesign of the handheld which was released on October 12, 2013, and is described as an "entry level" version of the 3DS. This console, while still capable of playing Nintendo DS and 3DS games, removes the 3D functionality and changes the form factor to a fixed, "slate" design. The New Nintendo 3DS, which also has an XL variant, adds additional controls and improved functionality, and will be able to play certain games not compatible with previous models.

The Nintendo 2DS (abbreviated to 2DS) was announced on August 28, 2013, as a new entry-level model of the Nintendo 3DS family. While its hardware and software are relatively similar to the Nintendo 3DS (and still offers compatibility with Nintendo DS and 3DS games), it lacks the 3DS's signature 3D screen, does not have internal stereo speakers (only using a mono speaker), and uses a slate-like form factor as opposed to the clamshell design used by its Nintendo DS and 3DS predecessors. The Nintendo 2DS was released in North America and Europe on October 12, 2013, coinciding with the launch of Pokémon X & Y and is being sold alongside the Nintendo 3DS and 3DS XL at a relatively lower price point.

As a cheaper model of the Nintendo 3DS family that still plays Nintendo DS and 3DS games, the Nintendo 2DS is seen as a market strategy to broaden the overall Nintendo handheld gaming market. As such, the 2DS is a handheld console targeted at a different audience than that of the regular Nintendo 3DS models, particularly younger users. Despite concerns from critics who felt that the company was trying to de-emphasize the 3D functionality by releasing the 2DS, Nintendo maintains that 3D is still part of their future plans.

The New Nintendo 3DS and New Nintendo 3DS XL (known as New Nintendo 3DS LL in Japan) are updated revisions of the 3DS and 3DS XL that were first unveiled during the Japanese Nintendo Direct presentation on August 29, 2014. The new models feature a more powerful processor, face tracking for improved 3D viewing angles, additional ZL/ZR shoulder buttons and a new "C-Stick" pointing stick that are comparable to and backward compatible with games that support the Circle Pad Pro, colored face buttons inspired by those of Super NES controllers, automatic brightness adjustment, microSD storage, larger batteries, and integrated near-field communications support for use with Amiibo products. The regular-sized New Nintendo 3DS also has slightly larger screens than the prior model, and a suite of interchangeable faceplates.

As with its predecessors, the New Nintendo 3DS is compatible with existing DS and 3DS titles. Some software titles, such as Xenoblade Chronicles 3D and Super Nintendo Entertainment System games released for Virtual Console, are specifically optimized for the device and its upgraded processor and are incompatible with earlier 3DS and 2DS models.

The systems were released in Japan on October 11, 2014, in Australia and New Zealand on November 21, 2014, and at retail in Europe and North America on February 13, 2015. Only the XL version was made available in North America at launch, though the smaller model was later released in a series of limited edition bundles. 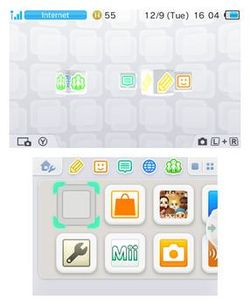 The Home Menu (stylized as HOME Menu) is a graphical user interface similar to the Nintendo DSi Menu and Wii U Menu for Nintendo 3DS systems. It is used to launch software stored on Nintendo DS and Nintendo 3DS Game Cards, applications installed on a SD card and DSiWare titles installed in the system's internal memory. Application icons are set in a customizable grid navigable on the lower screen. On the upper screen, a special 3D animated logo is displayed for each individual app, as well as system information such as wireless signal strength, date and time, and battery life. Using the Home button, users can suspend the current software that is running and bring up the Home Menu, allowing the user to launch certain multitasking applications, such as the Internet Browser and Miiverse.

Similarly to the Nintendo DSi, the menu has updateable firmware. On April 25, 2012, a system update brought the introduction of a folder system, which allows users to put applications inside folders. On June 20, 2013, a system update brought the introduction of the Save Data Backup feature, which allows the user to back up save data from downloadable Nintendo 3DS software and most Virtual Console games. An update was released on October 30, 2014 to enable players to download custom themes for the Home Menu, based on various Nintendo titles.

Nintendo 3DS Camera is a built-in photo and video recorder with an integrated media gallery and photo editing functionality. The app uses the system's two front-facing cameras to take 3D photos, and the user-facing camera to take regular 2D photos. All photographs are taken at a resolution of 640 x 480 px (VGA), or 0.3 megapixels. There are various options and filters available when taking photos or recording video. There is also a Low-Light option, which is useful when taking photos and recording video in low lighting conditions.

On December 7, 2011, a system update added the ability to record 3D video along special recording options, such as the ability to make stop motion animations. All recording modes only allow a single video to be up to 10 minutes long.

Nintendo 3DS Sound is a built-in music player and sound recorder. Supported filename extensions include MP3 audio with .mp3 and AAC audio with .mp4, .m4a, or .3GP. Audio files can be played from an SD card, with visualizations displayed on the upper screen. Music can be played while the console is closed, using the system's headphone jack. A set of sound manipulation options are available, as well as several audio filters. Ten-second voice recordings can be also be recorded and edited. These can then be shared throughout other applications such as Swapnote. There is also a StreetPass function built-into the app, where users exchange song data to make a compatibility chart between them.