The Wii U is a home video game console developed by Nintendo, and the successor to the Wii. The console was released in November 2012 and was the first eighth-generation video game console, as it competed with Microsoft's Xbox One and Sony's PlayStation 4.

The Wii U is the first Nintendo console to support HD graphics. The system's primary controller is the Wii U GamePad, which features an embedded touchscreen, and combines directional buttons, analog sticks, and action buttons. The screen can be used either as a supplement to the main display (either providing an alternate, asymmetric gameplay experience, or a means of local multiplayer without resorting to a split screen), or in supported games, to play the game directly on the GamePad independently of the television. The Wii U is backward compatible with all Wii software and accessories – games can support any combination of the GamePad, Wii Remote, Nunchuk, Balance Board, or Nintendo's more traditionally designed Classic Controller or Wii U Pro Controller for input. Online functionality centers around the Nintendo Network platform and Miiverse, an integrated social networking service which allows users to share content in game-specific communities.

The Wii U was met with a generally positive reception, including praise for its GamePad controller, improvements to online functionality over the Wii, backwards compatibility with existing Wii software and controllers, affordability in comparison to other eighth-generation consoles, and non-reliance on a subscription for online functionality. However, the Wii U received criticism in several areas, including the GamePad's battery life and issues with the console's user interface and functionality, along with a weak lineup of launch titles and a lack of clear vision. The Wii U was met with slow consumer adoption, with low sales primarily credited to a weak lineup of launch titles, limited third-party support, and poor marketing. Wii U production officially ended in January 2017. On March 3, 2017, Nintendo released a new flagship home console, the Nintendo Switch, although the Wii U was noted for pioneering several concepts that were refined in the Switch.

The black Wii U console, with 32 GB of internal storage.

The Wii U uses a custom multi-chip module (MCM) developed by AMD, IBM and Renesas in co-operation with Nintendo IRD and Nintendo Technology Development. The MCM combines an "Espresso" central processing unit (CPU) and a "Latte" graphics chip (GPU), as well as a SEEPROM memory chip. The Espresso CPU, designed by IBM, consists of a PowerPC 750-based tri-core processor with 3 MB of shared L2 cache memory and clocked at approximately 1.24 GHz. Despite belonging to the PowerPC family, the Espresso also shares some architectural concepts with the POWER7 architecture, such as the use of eDRAM cache and being manufactured at a 45 nm node. The Latte graphics chip contains both a "GX2" GPGPU, which runs Wii U applications, and a "GX" GPU, which enables backward compatibility with Wii games. The GX2, designed by AMD, is based on the Radeon R600/R700 architecture and is clocked at approximately 550 MHz. It is manufactured at a 40 nm node and contains 32 MB of eDRAM cache memory, which can also act as L3 cache for the CPU. The GX, originally designed by ArtX, contains a 1 MB and a 2 MB banks of eSRAM cache memory. The Latte chip also includes a secondary custom ARM9 processor with 96 KB of SRAM memory that handles system tasks in the background during gameplay or while the system is in sleep mode, and dedicated hardware audio DSP module.

The console contains 2 GB of DDR3 system memory consisting of four 512 MB DRAM chips with a maximum bandwidth of 12.8 GB/s. This is 20 times the amount found in the Wii. Of this, 1 GB is reserved for the operating system and is unavailable to games. The memory architecture allows the CPU and GPU to access both the main DDR3 memory pool and the eDRAM cache memory pool on the GPU, removing the need for separate, dedicated memory pools. The console includes either an 8 GB (Basic) or 32 GB (Deluxe (NA) / Premium (WW)) internal eMMC flash memory, expandable via SD memory cards up to 32 GB and USB external hard disk drives up to 2 TB.

The Wii U features 802.11 b/g /n wireless network connectivity and support for Fast Ethernet with an accessory, Bluetooth 4.0, a total of four USB 2.0 ports, and an SD/SDHC memory card slot. An additional power port is also included to power the Wii Sensor Bar, an auxiliary infrared emitter used by Wii Remote peripherals for motion tracking. Video output options include 1080p, 1080i, 720p, 576i, 480p and 480i, through HDMI 1.4 and component video (YPbPr, D-Terminal and RGB SCART) or 576i, 480i anamorphic widescreen through composite video (S-Video, SCART and D-Terminal). Audio output options include six-channel 5.1 linear PCM surround sound or analog stereo. The console also supports stereoscopic (3D) images and video. 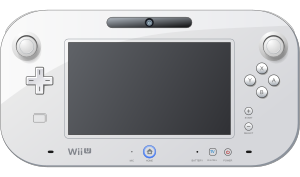 An illustration of the Wii U GamePad (White)

The Wii U GamePad is the console's primary controller: its main feature is a built-in 6.2 inch (15.7 cm) resistive touchscreen, which can be used as a companion to games being played on a television, or as a means of playing games on the GamePad itself without a television. The GamePad is designed to enable a concept referred to by Nintendo as "asymmetric gaming": in multiplayer games, a player using the GamePad may have a different gameplay objective and experience than other players.

The GamePad's display contents are rendered on the Wii U itself, and streamed wirelessly as video to the GamePad. The GamePad also supports near field communications; cards and specially-designed figurines, such as Nintendo's Amiibo line, can be used with the GamePad to interact with games. In Japan, it can also be used for contactless payments from eShop with Suica cards. 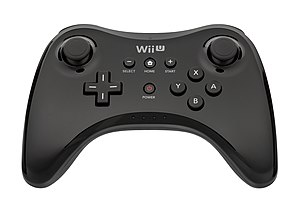 The Wii U Pro Controller, a more conventional controller compared to the Gamepad.

A new Wii U Pro Controller was released alongside the Wii U. The Wii U Pro Controller is an updated version of the Wii's Classic Controller that is designed to appeal to "hardcore" players, with a more traditional gamepad design that resembles those used by the PlayStation and Xbox lines (and in particular, the Xbox 360's controller), and a claimed 80-hour battery life.

The Wii U is compatible with existing Wii Remote and Wii Remote Plus controllers, along with their Nunchuk and Classic Controller attachments. A combination of up to four Wii Remotes or Pro Controllers can be used simultaneously, and the console can theoretically support up to two GamePads. Most software requires a Wii Sensor Bar in order to use Wii Remotes with the system, though some aspects, such as Off-TV Play and the Wii Mode, allow the Wii U GamePad to detect Wii Remotes. The Wii U does not natively support GameCube controllers. While a USB adapter accessory allows GameCube controllers to be used on the console in Super Smash Bros. for Wii U, it is not compatible with any other software.

Pressing the controller's "Home" button suspends the current game or app and opens the Home Menu: it shows basic information (such as the current time, controller battery levels, and notifications), and allows access to several "multitasking" functions, including the Nintendo eShop, Miiverse, download manager, a web browser, and the user's friends list. To play Wii games, the user must enter "Wii Mode", a legacy mode that emulates the Wii's system software and Wii Menu interface. Initially, Wii Mode could only be used on the television screen, but the October 2013 firmware update enables Wii Mode to be used off-TV. Either way, Wii controllers must be used.

The Wii U uses the Nintendo Network platform for online services (replacing the friend code system of the Wii), enabling online multiplayer, downloading and purchasing games or apps via Nintendo eShop, video chat using the GamePad's camera and the Wii U Chat service, and other services. Up to twelve accounts can be created per console.

A social networking service known as Miiverse is integrated into the Wii U's system software; it allows players to interact and share content in game-specific communities using their Mii as an avatar. Miiverse allows users to share accomplishments, screenshots, drawings and hand-written notes. Select games are integrated with Miiverse, where social interactions can also occur within the game, or appear within their content (such as in Splatoon, where drawn posts can appear as graffiti on walls in its settings). Miiverse is moderated through software filtering as well as a human resource team in order to ensure that the content shared by users is appropriate and that no spoilers are shared. In order to facilitate this, it was initially stated that comments posted could take up to 30 minutes to appear on Miiverse.

The Wii U supports online video services through apps, such as Amazon Video, Crunchyroll, Hulu, Netflix, and YouTube. The Wii U does not support playback of DVD or Blu-ray Disc; Iwata explained that the decision to exclude these formats was motivated primarily by patent licensing fees, and the fact that such functionality would be redundant to DVD and Blu-ray players that users may already own.

The Nintendo TVii service allowed program listings from a user's television provider to be aggregated with online video on demand services into an electronic program guide with recommendations and search functionality, and the ability to use the GamePad's infrared functionality to tune a set-top box to a particular program. The app also provided integration with IMDB, Rotten Tomatoes, and Wikipedia to provide additional information, and social connectivity through Facebook, Twitter, or Miiverse. TVii was made available with the Wii U's release in Japan on December 8, 2012, and in North America on December 20, 2012. Following delays, a European launch was cancelled, and the service was discontinued in North America on August 11, 2015. The service was discontinued in Japan on November 8, 2017.