The Xbox is a home video game console and the first installment in the Xbox series of consoles manufactured by Microsoft. It was released on November 15, 2001 in North America, followed by Australia, Europe and Japan in 2002. It was Microsoft's first foray into the gaming console market. It is a sixth generation console, and competed with Sony's PlayStation 2 and Nintendo's GameCube. It was also the first console produced by an American company since the Atari Jaguar ceased production in 1996.

Announced in 2000, the Xbox was graphically powerful compared to its rivals, featured an 733 MHz Intel Pentium III processor, a processor that could be found on a standard PC. It was also noted for its PC-like size and weight, and was the first console to feature a built-in hard disk. In November 2002, Microsoft launched Xbox Live, a fee-based online gaming service that enabled subscribers to download new content and connect with other players through a broadband connection. Unlike other online services from Sega and Sony, Xbox Live had support in the original console design through an integrated Ethernet port. The service gave Microsoft an early foothold in online gaming and would help the Xbox become a relevant competitor to other sixth-generation consoles. The popularity of blockbuster titles such as Halo 2 contributed to the popularity of online console gaming, and in particular first-person shooters. Despite this and being in second position, ahead of Nintendo's GameCube and Sega's Dreamcast, sales of the Xbox were always well behind Sony's PlayStation 2.

Xbox's successor, the Xbox 360, was launched in November 2005. The Xbox was soon discontinued beginning with Microsoft's worst-performing market, Japan, in 2005. Other countries would follow suit in 2006. The last Xbox game in Europe was Xiaolin Showdown released in June 2007, and the last game in North America was Madden NFL 09 released in August 2008. Support for out-of-warranty Xbox consoles was discontinued on March 2, 2009. Support for Xbox Live on the console ended on April 15, 2010. 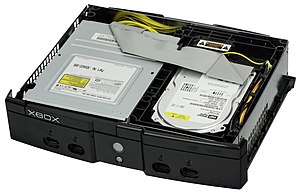 The use of standard desktop components such as a DVD-ROM and hard drive contributed to much of the Xbox's weight and bulk. 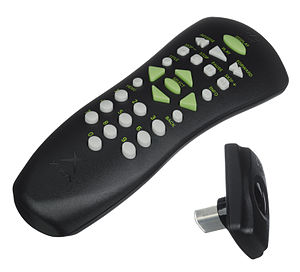 A separately-sold remote was required for DVD movie playback on the Xbox.

The Xbox was the first video game console to feature a built-in hard disk drive, used primarily for storing game saves and content downloaded from Xbox Live. This eliminated the need for separate memory cards (although some older consoles, such as the Amiga CD32, used internal flash memory, and others, like the TurboGrafx-CD, Sega CD, and Sega Saturn, had featured built-in battery backup memory prior to 2001). An Xbox user could rip music from standard audio CDs to the hard drive, and these songs were used for the custom soundtracks in some games.

The Xbox is based on commodity PC hardware and is much larger and heavier than its contemporaries. This is largely due to a bulky tray-loading DVD-ROM drive and the standard-size 3.5 inch hard drive. The Xbox has also pioneered safety features, such as breakaway cables for the controllers to prevent the console from being pulled from the surface upon which it rests.

Several internal hardware revisions have been made in an ongoing battle to discourage modding (hackers continually updated modchip designs in an attempt to defeat them), to cut manufacturing costs, and to make the DVD-ROM drive more reliable (some of the early units' drives gave Disc Reading Errors due to the unreliable Thomson DVD-ROM drives used). Later generation units that used the Thomson TGM-600 DVD-ROM drives and the Philips VAD6011 DVD-ROM drives were still vulnerable to failure that rendered the consoles either unable to read newer discs or caused them to halt the console with an error code usually indicating a PIO/DMA identification failure, respectively. These units were not covered under the extended warranty.

In 2002 Microsoft and Nvidia entered arbitration over a dispute on the pricing of Nvidia's chips for the Xbox. Nvidia's filing with the SEC indicated that Microsoft was seeking a $13 million discount on shipments for NVIDIA's fiscal year 2002. Microsoft alleged violations of the agreement the two companies entered, sought reduced chipset pricing, and sought to ensure that Nvidia fulfill Microsoft's chipset orders without limits on quantity. The matter was privately settled on February 6, 2003.

The Xbox includes a standard AV cable which provides composite video and monaural or stereo audio to TVs equipped with RCA inputs. European Xboxes also included an RCA jack to SCART converter block as well as the standard AV cable.

An 8 MB removable solid state memory card can be plugged into the controllers, onto which game saves can either be copied from the hard drive when in the Xbox dashboard's memory manager or saved during a game. Most Xbox game saves can be copied to the memory unit and moved to another console but some Xbox saves are digitally signed. It is also possible to save an Xbox Live account on a memory unit, to simplify its use on more than one Xbox.

Its GPU is Nvidia's 233 MHz NV2A. It has a floating-point performance of 7.3 GFLOPS, capable of geometry calculations for up to a theoretical 115 million vertices/second. It has a peak fillrate of 932 megapixels/second, capable of rendering a theoretical 29 million 32-pixel triangles/second. With bandwidth limitations, it has a realistic fillrate of 250–700 megapixels/second, with Z-buffering, fogging, alpha blending, and texture mapping, giving it a real-world performance of 7.8–21 million 32-pixel triangles/second. 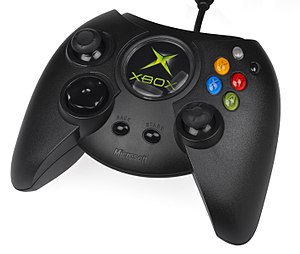 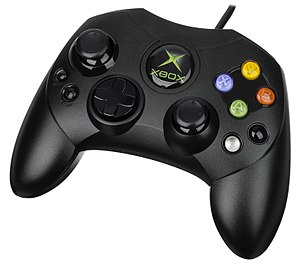 The Xbox controller features two analog sticks, a pressure-sensitive directional pad, two analog triggers, a Back button, a Start button, two accessory slots and six 8-bit analog action buttons (A/Green, B/Red, X/Blue, Y/Yellow, and Black and White buttons). The standard Xbox controller (also nicknamed the "Fatty" and later, the "Duke") was originally the controller bundled with Xbox systems for all territories except Japan. The controller has been criticized for being bulky compared to other video game controllers; it was awarded "Blunder of the Year" by Game Informer in 2001, a Guinness World Record for the biggest controller in Guinness World Records Gamer's Edition 2008, and was ranked the second-worst video game controller ever by IGN editor Craig Harris.

The Xbox runs a custom operating system which is based on the Windows architecture kernel. It exposes APIs similar to APIs found in Microsoft Windows, such as Direct3D 8.1. The system software may have been partially based on the Windows NT kernel, but it has modified log files.

The user interface for the Xbox is called the Xbox Dashboard. It features a media player that can be used to play music CDs, rip CDs to the Xbox's built-in hard drive and play music that has been ripped to the hard drive; it also lets users manage game saves, music, and downloaded content from Xbox Live, and lets Live users sign in and manage their account. The dashboard is only available when the user is not watching a movie or playing a game. It uses many shades of green and black for the user interface, to be consistent with the physical Xbox color scheme. When the Xbox was released in 2001, the Live service was not online yet so the dashboard's Live feature was unusable.

Xbox Live was released in 2002, but in order to access it, users had to buy the Xbox Live starter kit containing a headset, a subscription, and supplemental. While the Xbox was still being supported by Microsoft, the Xbox Dashboard was updated via Live several times to reduce cheating and add features.

The popularity of the Xbox, as well as (in the United States) its comparatively short 90-day warranty, inspired efforts to circumvent the built-in hardware and software security mechanisms.

The popularity of the Xbox, as well as (in the United States) its comparatively short 90-day warranty, inspired efforts to circumvent the built-in hardware and software security mechanisms, a practice known as "cracking". Within a few months of its release the initial layer of security on the Xbox BIOS (which relied heavily on obfuscation) was broken by MIT student Andrew Huang and the contents of the "hidden" boot ROM embedded on the MCPx chip was extracted using some custom built hardware. Once this information was available, the code was soon modified so that it would skip digital signature checks and media flags, allowing unsigned code, Xbox game backups, etc., to be run. This was possible due to flaws in the Xbox's security. Modding an Xbox in any manner will void its warranty, as it may require disassembly of the console. Having a modified Xbox may also disallow it from accessing Xbox Live, if detected by Microsoft, as it contravenes the Xbox Live Terms of Use, but most modchips can be disabled, allowing the Xbox to boot in a "stock" configuration. Softmods can be disabled by "coldbooting" a game (having the game in the DVD drive before turning the console on, so the softmod is not loaded) or by using a multiboot configuration.

Beyond gaming, a modded Xbox can be used as a media center with XBMC4Xbox.

There are also distributions of Linux developed specifically for the Xbox, including those based on Gentoo, Debian, Damn Small Linux and Dyne:bolic.

Throughout the history of the Xbox, Mod Chips have been nearly a necessity. As we move forward around the sun, unfortunately hardware starts to fall apart.

Video Tutorials by The Games Shed: