From Mod My Classic Wiki
(Redirected from Gamecube)
Jump to: navigation, search

The GameCube is the first Nintendo console to use optical discs as its primary storage medium. The discs are in the miniDVD format and the system was not designed to play full sized DVDs or audio CDs. The console supports online gaming for a small number of games via the broadband or modem adapter and connects to the Game Boy Advance via the link cable, allowing players to access exclusive in-game features using the handheld as a second screen and controller.

Contemporary reception of the GameCube was generally positive. The console was praised for its controller, extensive software library and high-quality games, but was criticized for its exterior design and lack of features. Nintendo sold 21.74 million GameCube units worldwide before it was discontinued in 2007. Its successor, the Wii, some models of which have backward compatibility with most GameCube software, was released in November 2006.

Howard Cheng, technical director of Nintendo technology development, said the company's goal was to select a "simple RISC architecture" to help speed development of games by making it easier on software developers. IGN reported that the system was "designed from the get-go to attract third-party developers by offering more power at a cheaper price. Nintendo's design doc for the console specifies that cost is of utmost importance, followed by space." Hardware partner ArtX's Vice President Greg Buchner stated that their guiding thought on the console's hardware design was to target the developers rather than the players, and to "look into a crystal ball" and discern "what's going to allow the Miyamoto-sans of the world to develop the best games".

We thought about the developers as our main customers. In particular for GameCube, we spent three years working with Nintendo of America and with all sorts of developers, trying to understand the challenges, needs, and problems they face. First among these is the rising cost of development. The GameCube can see high performance without too much trouble; it isn't a quirky design, but a very clean one. It was important we didn't require jumping through hoops for high performance to be achieved. On top of that, it is rich in features, and we worked to include a dream group of technical features that developers requested.

Initiating the GameCube's design in 1998, Nintendo partnered with ArtX (then acquired by ATI Technologies during development) for the system logic and the GPU, and with IBM for the CPU. IBM designed a PowerPC-based processor for the next-generation console, known as Gekko, which runs at 485 MHz and features a floating point unit (FPU) capable of 1.9 GFLOPS. Designed at 0.18 microns and described as "an extension of the IBM Power PC architecture", Gekko features IBM's reportedly then-unique copper-based chip manufacturing technology. Codenamed "Flipper", the GPU runs at 162 MHz and, in addition to graphics, manages other tasks through its audio and input/output (I/O) processors.

The GameCube introduced a proprietary miniDVD optical disc format as the storage medium for the console, capable of storing up to 1.5 GB of data. The technology was designed by Matsushita Electric Industrial (now Panasonic Corporation) which utilizes a proprietary copy-protection scheme – different from the Content Scramble System (CSS) found in standard DVDs – to prevent unauthorized reproduction. The Famicom Data Recorder, Famicom Disk System, SNES-CD, and 64DD had explored various complementary storage technologies, but the GameCube was Nintendo's first console to move away from cartridge-based media altogether. The GameCube's 1.5 GB mini-disc have sufficient room for most games, although a few games require an extra disc, higher video compression, or removal of content present in versions on other consoles. By comparison, the PlayStation 2 and Xbox, also sixth-generation consoles, both use 8.5 GB Dual-Layer DVDs.

Like its predecessor, the Nintendo 64, GameCube models were produced in several different color motifs. The system launched in "Indigo", the primary color shown in advertising and on the logo, and in "Jet Black". A year later, Nintendo released a "Platinum" limited edition GameCube, which uses a silver color scheme for both the console and controller. A "Spice" orange-colored console was eventually released as well only in Japan, though the color scheme could be found on controllers released in other countries.

Nintendo developed stereoscopic 3D technology for the GameCube, and one launch game, Luigi's Mansion, supports it. However, the feature was never enabled outside of development. 3D televisions were not widespread at the time, and it was deemed that compatible displays and crystals for the add-on accessories would be too cost-prohibitive for the consumer. Another unofficial feature are two audio Easter eggs that can be invoked when the console is turned on. When the power is activated with the "Z" button on the Player 1 controller held down, a more whimsical startup sound is heard in place of the standard one. With four controllers connected, holding down the "Z" button on all four simultaneously produces a "ninja-like" tune at startup.

Nintendo originally offered a digital video output on early GameCube models. However, it was determined that less than one percent of users utilized the feature. The company eventually removed the option starting with model number DOL-101 of May 2004. The console's technical specifications are as follows. 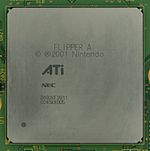 One of the two 1T-SRAM RAM modules shaven down to expose the die. 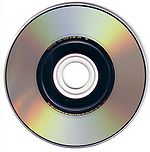 Nintendo learned from its experiences – both positive and negative – with the Nintendo 64's three-handled controller design and went with a two-handled, "handlebar" design for the GameCube. The shape was made popular by Sony's PlayStation controller released in 1994 and its follow-up DualShock series of gamepads introduced in 1997. In addition to vibration feedback, the DualShock series was well known for having two analog sticks to improve the 3D experience in games. Nintendo and Microsoft designed similar features in the controllers for their sixth-generation consoles, but instead of having the analog sticks parallel to each other, they chose to stagger them by swapping the positions of the directional pad (d-pad) and left analog stick. The GameCube controller features a total of eight buttons, two analog sticks, a d-pad, and an internal rumble motor. The primary analog stick is on the left with the d-pad located below and closer to the center. On the right are four buttons: a large, green "A" button in the center, a smaller red "B" button to the left, an "X" button to the right, and a "Y" button at the top. Below and to the inside is a yellow "C" analog stick, which often serves a variety of in-game functions, such as controlling the camera angle. The Start/Pause button is located in the middle, and the rumble motor is encased within the center of the controller. 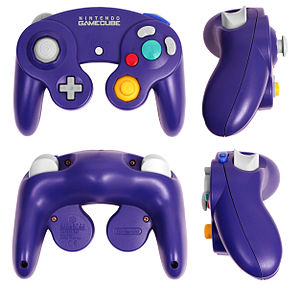 On the top of the controller are two "pressure-sensitive" trigger buttons marked "L" and "R". Each essentially provides two functions: one analog and one digital. As the trigger is depressed, it emits an analog signal which increases the more it is pressed in. Once fully depressed, the trigger "clicks" registering a digital signal that can be used for a separate function within a game. There is also a purple, digital button on the right side marked "Z".

Unique to the GameCube is the controller's prominent size and placement of the A button. Having been the primary action button in past Nintendo controller designs, it was given a larger size and more centralized placement for the GameCube. The rubberized analog stick in combination with the controller's overall button orientation was intended to reduce the dreaded "Nintendo thumb" – a term used to describe pain in any part of the hands, wrists, forearms, and shoulders as a result of long-term play.

The GameCube is unable to play games from other Nintendo home consoles, but with the Game Boy Player attachment, it is able to play Game Boy, Game Boy Color, and Game Boy Advance games. The GameCube's successor, the Wii, supports backward compatibility with GameCube controllers, memory cards, and games. However, later revisions of the Wii – including the "Family Edition" released in 2011 and the Wii Mini released in 2012 – dropped support for all GameCube hardware.

A hybrid version of the Nintendo GameCube with a commercial DVD player, called Q, was developed by Panasonic as part of the deal struck with Nintendo to develop the optical drive for the original GameCube hardware. Featuring a completely revised case, the Q overcomes the size limitation of the original GameCube's miniDVD tray by adding a commercial DVD-sized tray, among other hardware revisions. Released exclusively to Japan in December 2001, low sales resulted in the Q being discontinued in December 2003.