The Dreamcast is a home video game console released by Sega on November 27, 1998 in Japan, September 9, 1999 in North America, and October 14, 1999 in Europe. It was the first in the sixth generation of video game consoles, preceding Sony's PlayStation 2, Nintendo's GameCube and Microsoft's Xbox. The Dreamcast was Sega's final home console, marking the end of the company's 18 years in the console market.

In contrast to the expensive hardware of the unsuccessful Sega Saturn, the Dreamcast was designed to reduce costs with "off-the-shelf" components, including a Hitachi SH-4 CPU and an NEC PowerVR2 GPU. Released in Japan to a subdued reception, the Dreamcast enjoyed a successful U.S. launch backed by a large marketing campaign, but interest in the system steadily declined as Sony built hype for the upcoming PlayStation 2. Sales did not meet Sega's expectations despite several price cuts, and the company continued to incur significant financial losses. After a change in leadership, Sega discontinued the Dreamcast on March 31, 2001, withdrawing from the console business and restructuring itself as a third-party publisher. 9.13 million Dreamcast units were sold worldwide.

Although the Dreamcast had a short lifespan and limited third-party support, reviewers have considered the console ahead of its time. Its library contains many games considered creative and innovative, including Crazy Taxi, Jet Set Radio and Shenmue, as well as high-quality ports from Sega's NAOMI arcade system board. The Dreamcast was also the first console to include a built-in modem for Internet support and online play.

Physically, the Dreamcast measures 190 mm × 195.8 mm × 75.5 mm (7.48 in × 7.71 in × 2.97 in) and weighs 1.5 kg (3.3 lb). The Dreamcast's main CPU is a two-way 360 MIPS superscalar Hitachi SH-4 32-bit RISC clocked at 200 MHz with an 8 Kbyte instruction cache and 16 Kbyte data cache and a 128-bit graphics-oriented floating-point unit delivering 1.4 GFLOPS. Its 100 MHz NEC PowerVR2 rendering engine, integrated with the system's ASIC, is capable of drawing more than 3 million polygons per second and of deferred shading. Sega estimated that the Dreamcast was theoretically capable of rendering 7 million raw polygons per second, or 6 million with textures and lighting, but noted that "game logic and physics reduce peak graphic performance." Graphics hardware effects include trilinear filtering, gouraud shading, z-buffering, spatial anti-aliasing, per-pixel translucency sorting and bump mapping. The system can output approximately 16.77 million colors simultaneously and displays interlaced or progressive scan video at 640 × 480 video resolution. Its 67 MHz Yamaha AICA sound processor, with a 32-bit ARM7 RISC CPU core, can generate 64 voices with PCM or ADPCM, providing ten times the performance of the Saturn's sound system. The Dreamcast has 16 MB main RAM, along with an additional 8 MB of RAM for graphic textures and 2 MB of RAM for sound. The system reads media using a 12x speed Yamaha GD-ROM Drive. In addition to Windows CE, the Dreamcast supports several Sega and middleware application programming interfaces. In most regions, the Dreamcast included a removable modem for online connectivity, which was modular for future upgrades. The original Japanese model and all PAL models had a transfer rate of 33.6 kbit/s, while consoles sold in the US and in Japan after September 9, 1999 featured a 56 kbit/s dial-up modem. 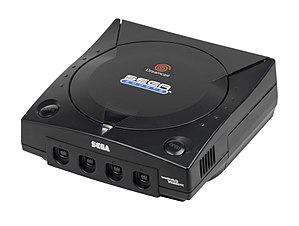 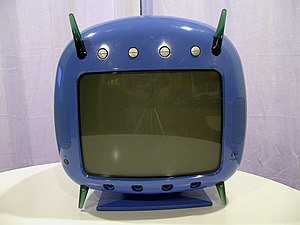 The Divers 2000 CX-1 was a special edition of the Dreamcast that had a built-in television set.

Sega constructed numerous Dreamcast models, most of which were exclusive to Japan. A refurbished Dreamcast known as the R7 was originally used as a network console in Japanese pachinko parlors. Another model, the Divers 2000 CX-1, possesses a shape similar to Sonic's head and includes a television and software for teleconferencing. A Hello Kitty version, limited to 2000 units produced, was targeted at Japanese female gamers. Special editions were created for Seaman and Resident Evil Code: Veronica. Color variations were sold through a service called "Dreamcast Direct" in Japan. Toyota also offered special edition Dreamcast units at 160 of its dealers in Japan. In North America, a limited edition black Dreamcast was released with a Sega Sports logo on the lid, which included matching Sega Sports-branded black controllers and two games. 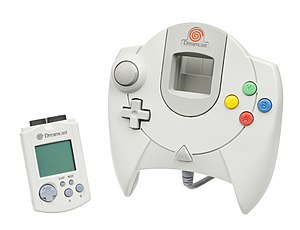 The Dreamcast controller has two dock connectors for use with multiple accessories, like the VMU

The Dreamcast controller includes both an analog stick and a digital pad, four action buttons, and two analog triggers. The system has four ports for controller inputs, although it was bundled with only one controller. The design of the Dreamcast's controller, described by the staff of Edge as "an ugly evolution of Saturn's 3D controller," was called "[not] that great" by 1UP.com's Sam Kennedy and "lame" by Game Informer's Andy McNamara. The staff of IGN wrote that "unlike most controllers, Sega's pad forces the user's hands into an uncomfortable parallel position." In contrast to the Sega CD and Sega Saturn, which included internal backup memory, the Dreamcast uses a 128 kbyte memory card called the VMU (or "Visual Memory Unit") for data storage. The VMU features a small LCD screen, audio output from a one-channel PWM sound source, non-volatile memory, a directional pad, and four buttons. The VMU can present game information, be used as a minimal handheld gaming device, and connect to certain Sega arcade machines. For example, players use the VMU to call plays in NFL 2K or raise virtual pets in Sonic Adventure. Sega officials noted that the VMU could be used "as a private viewing area, the absence of which has prevented effective implementation of many types of games in the past." After a VMU slot was incorporated into the controller's design, Sega's engineers found many additional uses for it, so a second slot was added. This slot was generally used for vibration packs providing force feedback like Sega's "Jump Pack" and Performance's "Tremor Pack", although it could also be used for other peripherals including a microphone enabling voice control and player communication. Various third-party cards provide storage, and some contain the LCD screen addition. Iomega announced a Dreamcast-compatible zip drive that could store up to 100 MB of data on removable discs, but it was never released.

Various third-party controllers from companies like Mad Catz include additional buttons and other extra features; third-parties also manufactured arcade-style joysticks for fighting games, such as Agetech's Arcade Stick and Interact's Alloy Arcade Stick. Mad Catz and Agetec created racing wheels for racing games. Sega decided against releasing its official light gun in the U.S., but some third party light guns were available. The Dreamcast supports a Sega fishing "reel and rod" motion controller and a keyboard for text entry. Although it was designed for fishing games such as Sega Bass Fishing, Soul Calibur was playable with the fishing controller, which translated vertical and horizontal movements into on-screen swordplay in a manner that was retroactively cited as a predecessor to the Wii Remote. The Japanese Dreamcast port of Sega's Cyber Troopers Virtual-On Oratorio Tangram supported a "Twin Sticks" peripheral, but the game's American publisher, Activision, opted not to release it in the U.S. The Dreamcast could connect to SNK's Neo Geo Pocket Color, predating Nintendo's GameCube–Game Boy Advance link cable. Sega also produced the Dreameye, a digital camera that could be connected to the Dreamcast and used to exchange pictures and participate in video chat over the system's Internet connection. Sega hoped developers would use the Dreameye for future software, as some later did with Sony's similar EyeToy peripheral. In addition, Sega investigated systems that would have allowed users to make telephone calls with the Dreamcast, and discussed with Motorola the development of an Internet-enabled cell phone that would have used technology from the console to enable quick downloads of games and other data.

The console can supply video through several different accessories. The console came with A/V cables, considered at the time to be the standard for video and audio connectivity. Sega and various third parties also manufactured RF modulator connectors and S-Video cables. A VGA adapter allows Dreamcast games to be played on computer displays or Enhanced-definition television sets in 480p.