The Game Gear is an 8-bit fourth generation handheld game console released by Sega on October 6, 1990 in Japan, in April 1991 throughout North America and Europe, and during 1992 in Australia. The Game Gear primarily competed with Nintendo's Game Boy, the Atari Lynx, and NEC's TurboExpress. It shares much of its hardware with the Master System, and can play Master System games by the use of an adapter. Sega positioned the Game Gear, which had a full-color backlit screen with a landscape format, as a technologically superior handheld to the Game Boy.

Though the Game Gear was rushed to market, its unique game library and price point gave it an edge over the Atari Lynx and TurboExpress. However, due its short battery life, lack of original games, and weak support from Sega, the Game Gear was unable to surpass the Game Boy, selling 10.62 million units by March 1996. The Game Gear was succeeded by the Genesis Nomad in 1995 and discontinued in 1997. It was re-released as a budget system by Majesco Entertainment in 2000, under license from Sega.

Reception of the Game Gear was mixed, with praise for its full-color backlit screen and processing power for its time, criticisms over its large size and short battery life, and questions over the quality of its game library. 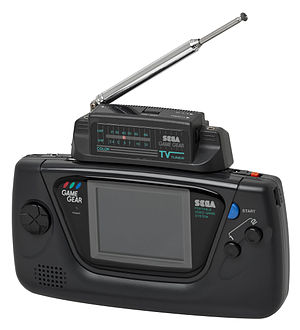 A Game Gear with TV Tuner plugged in

A handheld game console, the Game Gear was designed to be played while being held horizontally. The console contains an 8-bit 3.5MHz Zilog Z80 chip for a central processing unit, the same as the Master System. Its screen is 3.2 square inches in size and is able to display up to 32 colors at a time from a total palette of 4096 colors, at a display resolution of 160 × 144 pixels. The screen is backlit in order to allow gamers to play in low-lighting situations. Powered by 6 AA batteries, the Game Gear has an approximate battery life of 3 to 5 hours. In order to lengthen this duration and to save money for consumers, Sega also released two types of external rechargeable battery packs for the Game Gear. The system contains 8kB of RAM and an additional 16kB of video RAM. It produces sound using a Texas Instruments SN76489 PSG, which was also used in the Master System; however, unlike the Master System, stereo sound is able to be supplied through an output for headphones. Physically, the Game Gear measures 210mm across, 113mm high, and 38mm deep.

Several accessories were created for the Game Gear during its lifespan. A TV Tuner accessory with a whip antenna plugs into the system's cartridge slot, allowing the viewing of analog television stations over-the-air on the Game Gear's screen. Released at $105.88 ($186 in 2016), the add-on was expensive but unique for collectors and contributed to the system's popularity. Another accessory, the Super Wide Gear, magnifies the Game Gear screen to compensate for its relatively small size. Also released was the Car Gear adapter that plugs into cars or cigarette lighters to power the system while traveling, and the Gear to Gear Cable that establishes a data connection between two Game Gear systems using the same multiplayer game and let users play against each other.

Over the course of its lifespan, the Game Gear also received a number of variations. Later releases included several different colors for the console, including a blue "sports" variation released in North America bundled with World Series Baseball '95 or The Lion King. A white version was also released, sold in a bundle with a TV tuner. Other versions included a red Coca-Cola themed unit, bundled with the game Coca-Cola Kid, and the Kids Gear, a Japan-only variation targeted toward children.