It’s with great pleasure that we can announce the release of BleemSync 1.0.1!

Thank you everyone and the early adopters to our project, the majority of the feedback has been very useful and helpful. 1.0.1 is effectively a hotfix release to the 1.0.0 public beta with some included “quality of life” improvements. This update includes a new build of RetroArch with optimisations to the payload and improved run time management for emulation and general stability.

We would also like to mention that the development of BleemSync 1.1 is under full swing and is currently our number one priority. The largest features 1.1 will bring to the table are OTG and a desktop app.

The BleemSync devs are primarily from North America and Europe, and as such we did not have access to the Asian console releases. We fixed that and now BleemSync 1.0.1 works for Japanese and Chinese consoles.

A word of caution… There are hundreds of permutations and different variations of controllers. We simply can’t test them all however from the limited testing we have been able to do we have had success. For your controller to be 100% supported, it requires:

We bundled as many possible combinations as possible, but just please bare in mind this isn’t an exact science and we will extend the list when possible. 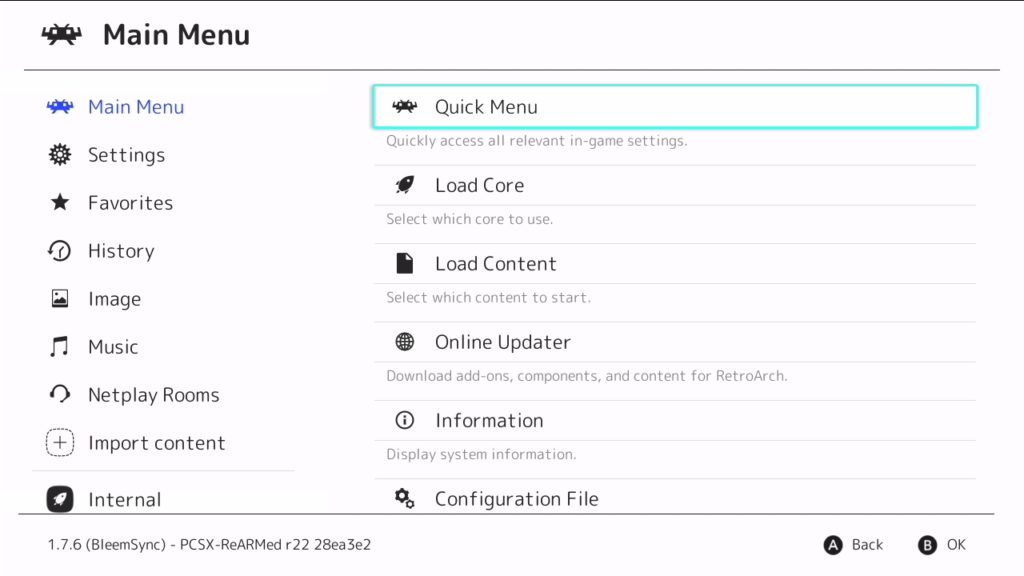 When updating BleemSync 1.0.1 from 1.0.0 we have made it so the BleemSync and RetroArch configurations aren’t overwritten if you unzip and overwrite all the files on the USB. BleemSync 1.0.1 comes with a brand new reworked RetroArch with a brand new menu format which is exclusive to the 1.7.6 release. When you upgrade it will update RetroArch but it won’t overwrite your configuration. If you wish to switch to all the latest configurations and new OZONE menu driver, then just delete your old RA config file from your USB here: USB:\bleemsync\opt\retroarch\.config\retroarch\retroarch.cfg

When you boot next it will load in the new default configuration for RetroArch.

Running BleemSync allows for extended filesystem support like exFAT and NTFS to help prevent USB corruption (FAT32 tends to be more susceptible to corruption due to power loss, brownouts, etc) but it now also tunes the dynamic memory during run time to improve stability, reduce crashing and improve performance (in certain situations) to improve your emulation experience as a whole.

As of BleemSync 1.0.0 you could actually boot directly to RetroArch with full playlist support by changing a single configuration value within a text file, however this was not documented well enough on the initial beta release. Along side 1.0.1, we are releasing an addon pack that will allow booting into RetroArch directly.

A note on custom themes – We have made it so when dragging over the new release on top of the old one will run the update on next boot and it won’t overwrite your old configurations for BleemSync and RetroArch (as explained above). However, if you have changed the default theme files in any way, this update will overwrite them! If you have changed these files, make sure to back them up before updating.

All credit goes to the BleemSync development team as normal, but also to our friends at libretro for their continued work on RetroArch and their assistance with getting this new build out to you guys. We would also like to give a big shout out to the community for being so supportive and especially our ModMyClassic supporters. A very big shout out to our Patreon supporters at the time of this release: reppin916, ibaneye, ocpleito, Cupcake, barfghost, DangerRenegade, Wraith

With all your constant support, positive vibes and generosity we are able to keep going and dedicate time to development of the software and community for you all!

Important notes
– Due to a bug not discovered before release, if you have edited settings through the BleemSync UI, the bootloader payload may not update. If you did not see the payload update and the bleemsync/flags/UPDATEfile is still present on your drive, please add the following to the config file bleemsync/etc/bleemsync/CFG/bleemsync_cfg.INI:

– If you are updating on a Mac, **make sure to select Merge** when you are overwriting files on your USB drive. Otherwise, you may delete your games database and configurations. Making a backup prior to upgrading is recommended.

Hey, I’ve followed every step in the tutorial for installing the 1.0.1 version. Everything goes smoothly ’til I try to load games from the bleemsyncui URL. The page loads OK but when I upload games it always fails. No matter what game I try. And after that I can’t retry, the connection with the psc is lost. Can someone explain me what may be happening? I googled a lot but can’t seem to find a solution.

If you check the FAQ you will be browning out with that current usb. You will need to try a different USB or wait for OTG support in 1.1

great work guys but one question: has OTG support been added? And so how does it work?

Do you have to use previous versions in order to get it to work? I tried it and it will not work.So wondering should i try a previous version,or do i need to install something else has well.

No, previous versions are not required. Furthermore, the latest version is 1.1

Basically, I didn’t upgrade my system from 0.4.1 (and I am very happy with it) because I don’t know if the 1.0.0 or the 1.0.1 modify the software within the playstation classic.

I am just doing it for warranty reasons: with 0.4.1 I just need to pull out the usb stick, to have again an original system…so, in case of problems or defects, I can return it easily.

yes its exactly the same. It does install a payload but if you run it without a stick it will effectively act like stock. There is also an uninstall option if you want to uninstall the payload in a warranty sitution.

Is there any option or possibility of completely sideloading Bleem and additional games into the system and have both ports open – no USB needed? Similar to how Hackchi worked on the NES and SNES classics?

Its been about the only thing making me waffle on buying a PSC and using BleemSync. I’d prefer to have everything all on the classic box.

Cheers for a great program regardless though!

I installed 1.0.1 but i don’t see a game folder or the game.ini & pcsx.cfg files. Don’t i need these files, if so how do i get them

you install the games via the user interface and shouldn’t require to manually do it.

Is it possible to go back and forth between bleemsync and autobleem using two flash drives or will it cause problems?

It will likely cause issues moving foward as bleemsync has a lot of system improvements for performance and stability. Switching between the two will cause alot of the optimisations, bugfixes and extra functionality to not work.

Great news, thank you. I have a question about compatibility with 360 game pad – how it works? Just plug gamepad USB adapter in ps classic, connect it with game pad and it’s done?

When scanning for game content for some reason it doesn’t add them on my collection list. Does it have something to do with old RA config, file deleted? Also when running the stock UI with retroarch the cheats don’t work. I hope you can correct that with the new update along with making analog sticks work with UI games. Thanks 🙂

if the current is under 100ma sure. Otherwise you need to wait for 1.1

there was an error plug in a power cable and restart,ENDLESS loop

Drive in or not

So basically i followed all the steps. The program is loaded on ps classic. i see the RetroArch on there and Bleemsync but when I try hooking the ps classic to pc, the light comes on and the USB is in the first player slot, and the controller is in 2. But when I load up the first Url in the steps on How to use bleemsync when installed, it won’t load, same for the second url. Even typed in bleemsyncui.com. Tried refreshing the page, using a different slot on my computer, even switched computers but it won’t load up. This is one of the last steps as far as I know and it just won’t load up. If anyone could help me with this, I’d appreciate it.

How do I delete the automatically generated Playstation internal playlist, and prevent it from regenerating again? I used to be able to do this by just deleting the playlist file with 1.0. With 1.0.1 It just keeps recreating it using stock RetroArch spaceship icons instead of the Playstation icons like it does when I create my own Playstation playlist with my added games.

what is the link for me to get earlier versions of Bleemsync. Unfortunately the updates are worthless to me for I have a mac.

Been enjoying 1.0.1 for a few months now, but while playing a game, there was a hitch, then none of the buttons would work, except directional pad/stick. I reset, and even on the bleem UI, i can rotate the game list but I cannot start a game, or even bring up the menu, buttons do not work. I tried overwritting my bleem install with a fresh one, and then doing the same with the pcsx.cfg files, but it still doesn’t work.

Is there any ETA regarding the 1.1 release and OTG support ? No need to be exact, just like “next few months” or more like “end of the year” does already.

Currently Installing 1.1 fresh on the PSC but it still says “Installing custom payload…” for the past 30 minutes. what do i do?

Please join our Discord Channel for support as these comments are not checked regularly. https://discord.me/modmyclassic

This website uses cookies to improve your experience while you navigate through the website. Out of these, the cookies that are categorized as necessary are stored on your browser as they are essential for the working of basic functionalities of the website. We also use third-party cookies that help us analyze and understand how you use this website. These cookies will be stored in your browser only with your consent. You also have the option to opt-out of these cookies. But opting out of some of these cookies may affect your browsing experience.
Necessary Always Enabled
Necessary cookies are absolutely essential for the website to function properly. This category only includes cookies that ensures basic functionalities and security features of the website. These cookies do not store any personal information.
Non-necessary
Any cookies that may not be particularly necessary for the website to function and is used specifically to collect user personal data via analytics, ads, other embedded contents are termed as non-necessary cookies. It is mandatory to procure user consent prior to running these cookies on your website.
SAVE & ACCEPT