The PlayStation Portable (PSP) is a handheld game console developed by Sony Computer Entertainment. It primarily competed with the Nintendo DS, as part of the seventh generation of video game consoles. Development of the handheld was announced during E3 2003, and it was unveiled on May 11, 2004, at a Sony press conference before the next E3. The system was released in Japan on December 12, 2004, in North America on March 24, 2005, and in the PAL region on September 1, 2005. 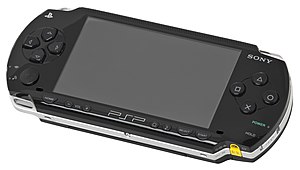 A PSP-1000: the shoulder buttons are on top, the directional pad on the left with the analog "nub" directly below it, the PlayStation face buttons on the right and a row of secondary buttons below the screen.

), the directional pad, the analog "nub", and several other buttons. In addition, the system includes two shoulder buttons and a USB 2.0 mini-B port on the top of the console and a WLAN switch and power cable input on the bottom. The back of the PSP features a read-only UMD drive for movies and games, and a reader compatible with Sony's Memory Stick Duo flash cards is located on the left of the system. Other features include an IrDA-compatible infrared port and a two-pin docking connector (discontinued in PSP-2000 and later), built-in stereo speakers and headphone port, and IEEE 802.11b Wi-Fi for access to the Internet, ad-hoc multiplayer gaming, and data transfer.

The PSP runs a custom operating system referred to as the System Software, which can be updated over the Internet or by loading an update from a Memory Stick or UMD. The software cannot be downgraded.

While System Software updates can be used with consoles from any region, Sony recommends only downloading updates released for the model's region. System Software updates have added features including a web browser; Adobe Flash support; additional codecs for images, audio and video; PlayStation 3 connectivity; and patches against security exploits, vulnerabilities and execution of homebrew programs. The most recent version is 6.61, released on January 15, 2015.

The PSP-2000 (marketed in PAL areas as "PSP Slim & Lite") is the first redesign of the PlayStation Portable. At E3 2007, Sony released information about a slimmer and lighter version. It was released on August 30 in Hong Kong, September 5 in Europe, September 6 in North America, September 7 in South Korea and September 12 in Australia.

The serial port was modified in order to accommodate a new video-out feature (rendering older PSP remote controls incompatible). On the PSP-2000, games will only output to external monitors or TVs in progressive scan mode. (Non-game video outputs work in either progressive or interlaced mode.) USB charging was made possible, and the D-Pad was raised in response to complaints of poor performance, while buttons offer improved responsiveness.

Other changes include improved WLAN modules and micro-controller, and a thinner and much brighter LCD. To improve the original PSP's poor load times of UMD games, the internal memory (RAM and Flash ROM) was doubled from 32 MB to 64 MB, with a part of it now acting as a cache, also improving the web browser's performance.

In comparison to the PSP-2000, the 3000 (marketed in PAL areas as "PSP Slim & Lite" or "PSP Brite") has an improved LCD screen featuring an increased color range, five times the contrast ratio, half the pixel response time, new sub-pixel structure, and anti-reflective technology to reduce outdoor glare. The disc tray, logos and buttons were all redesigned and the system now has a microphone. In addition, all games may now be output by component or composite using the video-out cable. Some outlets called this "a minor upgrade".

On release, an issue with interlacing was noticed on the PSP-3000 screen when objects were in motion. Sony announced that it would not be fixed.

The PSP Go (model PSP-N1000) was released on October 1, 2009, in North American and European territories, and on November 1 in Japan. It was revealed prior to E3 2009 through Sony's Qore VOD service. Its design is significantly different from other PSPs.

The unit is 43% lighter and 56% smaller than the original PSP-1000, and 16% lighter and 35% smaller than the PSP-3000. Its rechargeable battery is not intended to be removable by the user. It has a 3.8-inch (97 mm) 480 × 272 pixel LCD screen The screen slides up to reveal the main controls. The overall shape and sliding mechanism are similar to that of Sony's mylo COM-2 Internet device. 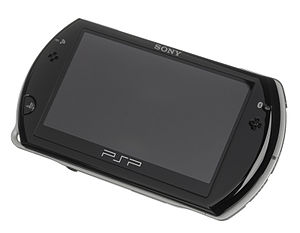 The PSP Go features 802.11b Wi-Fi like its predecessors, but replaced its USB port with a proprietary connector. A compatible cable that connects to other devices' USB ports is included with the unit. The new multi-use connector allows for video and sound output with the same connector (using an optional composite or component AV cable). Sony also offers a cradle (PSP-N340) for charging, video out and USB data transfer on the PSP Go, similar to previous offerings. The PSP Go adds support for Bluetooth connectivity, which enables playing games using a Sixaxis or DualShock 3 PlayStation 3 controller. The use of the cradle along with the controller allow players to use the PSP Go as a portable device and as a console, although the output is not upscaled. PlayStation 1 games can be played in full screen using the AV/component cable or cradle.

The PSP Go lacks a UMD drive, but instead has 16 GB of internal flash memory. (This can be extended by up to 32 GB with the use of a Memory Stick Micro (M2).) Games must be downloaded from the PlayStation Store; a demo version of Patapon 2 comes loaded onto the system. The removal of the UMD drive effectively region-locks the unit due because it must be linked to a single region-locked PlayStation Network account. The PSP Go can directly download to itself, or users can also download then transfer games from a PlayStation 3 or the Windows-based Media Go software.

All downloadable PSP and PlayStation games available for older PSP models are compatible with the PSP Go. Sony confirmed that almost all UMD-based PSP games released after October 1, 2009, would be available for download, and that a majority of older UMD-only games would also be downloadable.

In February 2010, it was reported that Sony might re-launch the PSP Go due to the lack of consumer interest and poor sales. Sony began bundling it with 10 free downloadable games in June 2010; the same offer was made available in Australia in July. Three free games were offered for the PSP Go in America. Sony announced a price drop for the PSP Go in October 2010.

On April 20, 2011, the manufacturer announced that the PSP Go would be discontinued outside of North America so that it could concentrate on the PlayStation Vita.

Announced at Gamescom 2011, the PSP-E1000 is a budget-focused model released across the PAL region on October 26 of that year. The E1000 does not feature Wi-Fi capability and has a matte charcoal black finish similar to the slim PlayStation 3. It features a mono speaker instead of the previous models' stereo speakers and lacks a microphone. An ice white version was released in PAL territories on July 20, 2012.

To make the unit slimmer, the capacity of the battery was reduced from 1800 mAh to 1200 mAh in the PSP-2000 and 3000 models. However, due to more efficient power use, the expected play time is the same. The old high-capacity batteries work on the newer models, for increased playing time, though the battery cover will not fit. The batteries take about 1.5 hours to charge and last roughly 4.5–7 hours depending on factors such as screen brightness settings, WLAN and volume levels.

In March 2008 Sony released the Extended Life Battery Kit in Japan, which includes a bulkier 2200 mAh battery with a fitting cover. In Japan the kit was sold with a specific cover color matching the many PSP variations available; the North American kit released in December 2008 came with two new covers, one black and one silver.

The PSP was sold in four main configurations. The Base Pack (called the Core Pack in North America) contained the console, a battery and an AC adapter. This version was available at launch in Japan and released later in North America and Europe.

Sony sold a GPS Accessory for the PSP-2000, which was released first in Japan and announced for the United States in 2008. It features maps on a UMD, and offers driving directions and city guides.

After the discontinuation of PSP, the Chinese electronics company Lenkeng released a PSP to HDMI converter called the LKV-8000. The device is compatible with the PSP-2000, PSP-3000 and PSP Go. To overcome the problems of PSP games being displayed in a small window surrounded by a black border, the LKV-8000 featured a zoom button on the connector itself. A few other Chinese companies have released clones of this upscaler under different names, like the Pyle PSPHD42. The LKV-8000 and its variants have become popular among players and reviewers as the only means of playing and recording PSP gameplay on a large screen.

The PSP Internet Browser is a version of the NetFront browser and came with the system via an update. The browser supports most common web technologies, such as HTTP cookies, forms, CSS and basic JavaScript. It features limited tabbed browsing, with a maximum of three tabs.

Remote Play allows the PSP to access many features of a PlayStation 3 console from a remote location using the PS3's WLAN capabilities, a home network, or the Internet. Features that can be used with Remote Play include viewing photos, listening to music and watching videos stored on the PS3 or connected USB devices. Additionally, Remote Play allows the PS3 to be turned on and off remotely and lets PSP to control audio playback from the PS3 to a home theater system. Although most of the PS3's capabilities are accessible with Remote Play, playback of DVDs, Blu-ray Discs, PlayStation 2 games, most PlayStation 3 games and copy-protected files stored on the hard drive are not supported.

Starting with system software version 3.90, the PSP-2000, 3000 and Go can use the Skype VoIP service. Due to hardware constraints it is not possible to use the service on the PSP-1000. The service allows Skype calls to be made over Wi-Fi and, on the Go, over the Bluetooth modem. Users must purchase Skype credit in order to make telephone calls.

It was announced at Tokyo Game Show 2009 that a similar service to PlayStation Home, the PlayStation 3's online community-based service, was being developed for the PSP. Named "Room" (stylized R8M), it was being beta tested in Japan from October 2009 to April 2010. It was able to be launched directly from the PlayStation Network section of the XMB. Just like in Home, PSP owners would have been able to invite other PSP owners into their rooms to "enjoy real time communication". Development of Room halted on April 15, 2010, due to feedback from the community.

Sony shut down the Digital Comics service in September 2012. 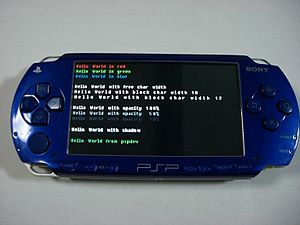 On June 15, 2005, hackers disassembled the code of the PSP and distributed it online. Initially the modified PSP allowed users to run custom code and a limited amount of protected software. These included custom-made PSP applications such as a calculator or file manager. Sony responded to this by repeatedly upgrading the software.

Over time people were able to unlock the firmware and allow users to run more custom content and DRM-restricted software. One of the ways hackers were able to run protected software on the PSP was through the creation of ISO loaders which could load copies of UMD games from the memory stick. Custom firmware including the M33 Custom Firmware, Minimum Edition (ME/LME) CFW and the PRO CFWl are also commonly seen in the PSP systems.